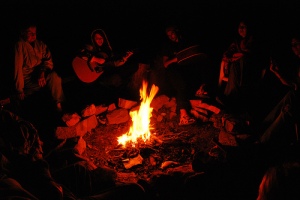 [Image: The Sacred Art of Language].

Many years ago, I spent a slightly surreal weekend on the Howqua River in north east Victoria, where, as luck would have it, there was both a mountain cattleman’s gathering and a big enclave of environmental activists holding campaign workshops. Our camps squeezed closer together as the crowds packed in along Sheepyard Flat, and the initial distrust dissolved on the second or third night as we found some common cause in shared music around the fire.

It was one of those nights to remember. I recall that we got on famously, that many songs were traded, and various social lubricants were consumed. What I most remember was the music.

Music is one of those things that defines culture. Any authentic culture has its own music, songs that grow from who its people are and how they live, and also the place they live in. There’s nothing wrong with playing other people’s songs, but almost everything I heard that night was from somewhere else.

Like so many things in life now days, music is often homogenised and generic. Whereas Country music originally came from somewhere, and in many instances still does, much of it is as disconnected from real Place as any of the rubbish that comes from the big music labels.

In my travels, I have heard some incredible music that came from somewhere real. Home grown folk at festivals in the Pacific North West, Hip Hop in Lagos, traveller music in middle England, a band in a mountain town in Switzerland, who sang of the heartbreak of ‘heading down’, of leaving home for the big city lights in the valley below. Sometimes people adopt music from somewhere else and make it their own. I heard Bob Marley on a warm night in the back blocks of Nigeria, and suddenly ‘got’ his work, half a world away from where he wrote it.

When I think back to that night on the Howqua, I feel sad that none of us had music that grew from that place. The Cattlemen had tinny country music that sounded like it was from Tamworth or Texas. Us greens had generic, albeit homegrown, folk. What would music sound like that comes from that valley, and those mountains?

Cultural music traditions only come from a place when there are enough people who are switched on to that place for long enough that they start to play music that ‘works’ there. While we might like to point to Bluegrass as a Western example of this, it took generations to grow from the fusion of Scottish, English, Welsh and Irish traditional music in the particular medium that was the Appalachian mountains.

Music from Place needn’t be too earnest. But it can cast our terrain as a real backdrop, and it can come from the experience of living, growing, loving, working and being in a particular landscape, like Mia Dyson’s evocative instrumental Tali Karng, seemingly written while sitting by that lake hidden up in the mountains in Gippsland, or Sal Kimber’s Sunnyside, about the mining town that grew on the flanks of Mt Wills in the 19th century.

I’m sure I am missing lots of great musos out there, and have been lucky enough to hear a few of them around late night fires or pubs in lots of spots, from Goongerah to Wandiligong, the Wellington Plains and The General at Mt Hotham.

I love music about people and culture and all the things we do to fill our time. And I love all those things when they happen somewhere real, be it driving down Hoddle Street in Melbourne as Paul Kelly looks up at the Skipping Girl sign, or Kev Carmody’s Droving Woman, that sketches the life of following mobs of cattle through Channel Country, home schooling, mud and cold, and clear starry nights. I think of Joanne Rand and Alice di Micele, who have written about their life long experiences in the Pacific North West (Alice wrote a great album after working as a river guide, and both sing to and about their place and community).

That’s what I want, music that evokes the mountains I know and love: the cold, the lightening, the jumping rivers, the snow and the fire seasons, the colour of the dead snow gums as they bleach through years of sun.

I’d like to be promoting some of this work on these pages. Please let me know when you find it – or if you’re playing it.

Some people that come to mind when I think of music that resonates with a sense of place:

From Whidbey Island, in Washington State, Timothy’s music resonates with a sense of place. From forest blockades and locking on to slow the arrival of the logging trucks, wandering the hills only to find logged out landscapes, and late night sessions in Eugene (think Nimbin mixed with Lismore), his music comes heavy with the rain and damp soil, the forests of the north west.

Journeys to Europe and the UK brought new musical influences. His songs are sometimes introspective and love lost, but also hopeful, wandering and shining with the fragile beauty of being alive. These are songs that are deep and rich.

And they are honest about the reality of the pain any sane person should feel as they see the world made poorer day by day as humans take more and leave ever less for the other species. Knowing this, and holding that pain without giving up hope, is the challenge for every person prepared to be honest about the ecological holocaust unfolding around us. In this sense, I find a lot of his music like food for the soul.

Stars glide across the skies of September

All the August stars fell away

All that’s left to do now is remember

And then come the winter, come what may

You feel the weight of ages

You feel the weight of ages – but you know why

All our merry hearts are breaking

All our hearts are breaking but we know why

(all our merry hearts)

We went looking for some big trees. There were none to find.

We went looking for any kind of tree, something old and growing to remind

Remind us of the good wild lands, the wilderness deep inside our heart

We found dust and chainsaw marks

Well, we’ve all been torn apart

(the American side of the moon)

When your heart feels torn apart

As the wildlands fall

And you can’t find

Any sustenance at all

You don’t know how to take it

You don’t know how to fight

When your only real home

is the wild home torn apart

and every new road they cut

is cut across your heart

Casey Neill lives in Portland in the Pacific North West. His first album, Riffraff (1996), was a mostly thrashy, punk folk effort that was popular with the Earth First! crew. In the late ‘90s his work became more traditional, with a stronger Celtic influence and some beautiful compositions. His songs became less openly political over time but more about the places he visited and lived. I don’t know anyone who can do a better Lost Love song that weaves in landscape and terrain as well as relationship (Colville Blues being the classic tune that fits the bill). A stint living on the East Coast of the US led to the album Brooklyn Bridge, which brought his keen eye for observation out of the hills and into the suburbs, river and city.

Back in Portland, his more recent albums feel really settled, like he has found his pace musically, and his place in the world. Cynicism about earlier activist scenes and the passing of life are common themes, but so is appreciation of the country where he finds himself living and working.

I love his homage to the land and people of “Okanagan County” on one of his earlier albums (Skree, released in 1999). This is one of his great songs, a hymn to living well in the rocky river and gorge country of the Okanagan highlands of Washington state.

He also has a classic song that moves from the forests of the east to the Pacific coast, acknowledging the power and beauty of each landscape.

“…Somewhere I carry with me every bear I’ve ever seen
every drainage, every rivulet, the twilight sheen
of the wild inhabitations in the heart of the hinterland
a dialect is spoken you can almost understand
the step of the seasons, the treasure of terrain
It has changed me so completely and I’ll never be the same
never be the same…