Two Lake Mountain cross country skiers are showing their potential for the international stage by snapping up major Australian national titles this season and with the promise of more to come.

Twenty-year old Casey Wright and Kat Paul, 19, recently won their first open women’s national titles at Perisher which Kat quickly followed up with a clean sweep at the Junior National Championships at Falls Creek on the weekend of August 1 and 2.

Their strong performances are on the back of a stint training and competing in the United States and Europe during the northern hemisphere winter.

Not only did they clearly benefit from training and competing in countries where the standard of cross country skiing is exceptionally high, they also held their own with excellent placings in international events in the US and Sweden.

Casey, who is currently ranked as the third top female sprinter in Australia, qualified for and competed in the 2015 Falun World Championships in Sweden where she placed third in the 5km qualifying race. She was also selected to compete in the women’s team sprint and was named in the first women’s relay in 20 years.

Meanwhile, Kat was fifth in the US junior nationals in the skate sprint and finished in the top 10 in the 10km classic. In Europe she was thrilled to place in the top 50 in the world junior championships.

Finn Marsland, High Performance Manager for Cross Country Skiing with Ski and Snowboard Australia, said Casey and Kat have made a big step forward so far this season and have shown a lot of gain from the Sun Valley Ski Education Foundation program they attended in Idaho.

Looking ahead, Marsland said the young women’s strong form will give them a timely lead up to the 2016 world championships in Romania where Casey is hoping to compete in the under 23s and Kat in the juniors.

“They are tracking well for 2017 in Finland where we will see if they can progress to Olympic qualification standard for the Winter Olympics in South Korea,” Marsland added.

In the 2015 Australian Open Championships and FIS-New Zealand Cup at Perisher on July 25 and 26, Casey and Kat were the first women home respectively in the open classic and freestyle sprint events. In a clear show of their dominance, and despite the blizzard conditions, they were also runners up to each other. Their wins were the first time either had won an open national title. Casey’s younger brother Abe, who also spent his summer in Sun Valley was placed third junior at Perisher.

On the weekend of August 1 and 2, Kat confirmed her place as Australia’s number one junior after making a clean sweep in her events at Falls Creek.

Casey and Kat, who are ambassadors for the Lake Mountain Alpine Resort, as well as training buddies and very competitive rivals, are now the hot favourites for the final open women’s national championships to be held at Falls Creek on August 15 and 16. Highlighting the caliber of athletes competing, Slovenia’s Barbara Jezersek, who is ranked in the top 20 in the world, was the overall winner at Perisher.

To finish off the Australian season, Casey has her sights set on the 42km Hoppet at Falls Creek on August 22, while Kat is aiming for at least a podium finish in the 21km Birkebeiner which Casey won in 2014. The events are part of the Worldloppet long distance cross-country skiing series.

Scott Gamble, Manager at Lake Mountain Alpine Resort, said Casey and Kat were wonderful ambassadors for the sport of cross country skiing as well as LMAR where they first learned to ski, almost before they could walk. 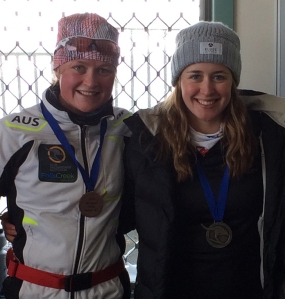 He said they were terrific role models and contributed much to the further development of the sport through initiatives such as the Fast and Female program at Lake Mountain and also a roller ski program at Marysville Primary School.

Given their fierce ambitions at an international level, Casey and Kat have hectic schedules, particularly at this time of year.

Casey is from Launching Place in the Yarra Valley and currently based at Falls Creek where she is juggling training and competition with part- time online studies for a degree in Exercise and Sport Science, Human Movement. She also works at the Howman’s Gap Alpine Centre to help keep herself afloat financially and help fund her quest for Romania next year.

Meanwhile, Kat describes herself as a bit of a “gypsy”, constantly on the road between Melbourne where she has just commenced a Bachelor of Business with thoughts of majoring in Sport Management, the family home in Taggerty, work at Lake Mountain, and Falls Creek for training and competition. Kat’s parents Andrew and Sandra Paul have are former Olympic biathlon athletes.

Both young women live and breathe cross country skiing and all the fun and friendships they derive from being with like-minded people, striving to achieve their athletic potential.

Whilst their schedules are relentless, they both agree they wouldn’t want it any other way.

“Those blue bird days skiing on top of the Bogong High Plains make it all worthwhile for me”, said Casey whilst Kat added: “I hate the cold so it can sometimes be an effort to train when it is snowing, wet and windy but, you make it work and when I am done ,I feel great.”