With the price of gold rising rapidly, much of regional Victoria is seeing renewed interest from mining companies, who are seeking exploration licences. In the Upper Ovens and Kiewa Valleys, there is strong local opposition to mining. A survey of local attitudes to mining highlights that gold mining does not have social license to operate in these areas.

The group No Gold Drilling (and no more gold mining) in Our Shire Valleys has released the results from their survey:

END_OF_DOCUMENT_TOKEN_TO_BE_REPLACED

Please express your views about gold-mining in the Alpine Shire

It comes as a gold exploration company has been drilling in the Havilah Valley in recent weeks.

“We were getting clear indications many people in the Alpine Shire were not happy with the exploratory drilling and the prospect of new gold mines in the area” said Col Finnie, administrator of the group. “But we thought it was time to find out what ratepayers and residents of the Shire think, hence launching a Survey Monkey survey.”

No Gold Drilling for the Upper Ovens Valley

An Exploratory Licence application for gold is with the Victorian government’s Earth Resources department for the upper Ovens Valley. The deadline for objections is 23 December. The best time to stop a destructive project is before it gets going. Please add your voice to the strong community campaign against this proposal.

Governments and companies often dismiss opposition to exploration, saying that ‘any environmental issues will be considered’ if the proposal moves toward a mining application. But the more money the miner puts into the project, the more they will push through with the proposal to commercialise. The best time to stop it is before exploration starts. And if a project has no social license to operate, why approve exploration? There is strong local opposition to gold exploration in the Upper Ovens. In a time of climate change, where water flows are expected to decline over time, the river systems that rise in the Victorian Alps will become even more important for downstream communities and environments. Why would we risk such a significant river system for short term gain for a mining company?

Will we recognise the future?

Every time I drive up the hill from Harrietville to Mt Hotham, I feel a strange mix of joy and sadness. Its always good to get back into the mountains. But those burnt out alpine ash forests break my heart.

People will often say ‘fire has always been part of the landscape’. True. But that misses the point that fire intensity and frequency is already increasing as we lurch into the climate change influenced future. In my lifetime it has already transformed many of the landscapes I know and love best. What will the coming decades bring?

END_OF_DOCUMENT_TOKEN_TO_BE_REPLACED

Aerial spraying of herbicides in the Ovens Valley

This forum will be an opportunity for residents to hear about the impacts of aerial spraying of the herbicides Clopyralid, Glyphosate and Metsulfuron Methyl in the plantations around Bright and surrounding townships.

I have been out checking some of my special places, to see how they are faring after last summer’s Feathertop fire. The north razorback fire burnt hot up and out of the Ovens river, past Mt Smythe and into the Upper Buckland River and swinging east around the massive bulk of Hotham and towards Dinner Plain.

Many of the forests along the Sugarloaf Ridge were badly burnt and now big swathes of burnt out country have been clearfelled to protect the Great Alpine Road. I understand the need to cut out the alpine ash close to the road that had been killed in the 2013 or earlier fires, but a major over clearing has happened on the slopes of Mt St Bernard, where fire killed snowgums well back from the road had been clearfelled for no obvious reason.

Parts of this country have been burnt three times in a decade. Each year, the land becomes ever more of a mosaic of new burn, older burn, and pockets of old forest – alpine ash and snow gum – that have survived each onslaught. The 2013 fire has killed off forests, glades, slopes that had survived the earlier fires. The headwater country of the Ovens, Buckland, and Wongungarra were hammered hard over the past summer. To my eyes that land seems poorer, from too many burns in too few seasons. 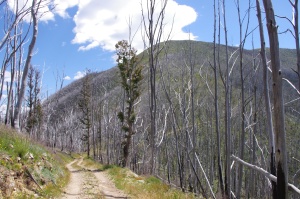 Fire has always been a part of our landscape. And climate science clearly tells us that longer and harder fire seasons are our future. These last few days I have wandered through alpine ash slopes and snow gum forests that had been completely scorched. Other areas have been lightly burnt, others spared altogether. The fire burnt hot up out of the Ovens, then seemed to turn back around some of the higher ridges on the Divide slower and with less heat. Its incredible to see some areas thick with new fern and daisys, while other areas as still mostly bare soil and logs, dead trees still black, streamers of bark rattling in the breeze. In some areas wattle are shooting back, in others, the beginning of Elderberry Panax groves or thick rushes of snow gums re-shooting around the burl of parent trees. If anything, the most recent fires have increased the mosaic effect on the ground.

Below tree line, the forests on these mountains can look so similar from a distance. Up close it is a mix of montane forests merging to alpine ash, leading to snow gum, the mix of vegetation in each place all dependent on slope and aspect, altitude and soil, fire history and circumstance. These most recent fires have added to the mix of already complex ecosystems and forest types.

In my mind I can see a future of more frequent fires, longer summers, warmer winters, and the land that I know and love so well being transformed into something new and poorer. Less old growth, trees pushed beyond their limits, less diversity of living things. But in the short term – summer to summer, the annual cycle that my mind can hold and understand – I see nature adapting and filling the spaces created by each fire. There is a deep ability for tenacity and resilience, seeking balance. The great unknown we face is that we do not yet understand the point at which we will have crossed beyond the balance of resilience and natural cycle into the time when balance will be broken by a human induced future. Some days I am frightened that no one knows, or will even be able to identify, that point of no return, when resilience is surpassed by a new reality that will make our familiar lands a new country, one that is foreign and strange, beyond anything we have known before.