Tali Karng – a jewel in a changing landscape

Tali Karng is a magical lake, tucked away in the mountains north east of Licola in the Victorian high country.

According to Parks Victoria, Tali Karng is the only natural lake within the Victorian Alps. ‘Held behind a rock barrier created thousands of years ago, the underground stream it feeds emerges as the infant Wellington River 150m below in the Valley of Destruction’. It is about 14 ha in size and sits in a deep valley. It has been a hugely popular walking destination for decades, especially with scout and school groups, and ‘doing the Tali Karng’ walk is a rite of passage for many as they transition from weekend to longer walking trips. It is also a place that reflects the changing way we view, manage and visit our wild natural places.

The lake is on the traditional lands of the Gunaikurnai people, most likely members of the Brayakaulung clan. When I first visited Tali Karng at 15 years of age, I had no idea of the First Nation connection and we often camped by the lake. There was no signage or acknowledgement of the traditional owners. At that point I had no awareness of Aboriginal people in the mountains and I assume that was the same for most people who loved bushwalking.

That started to change after the Gunaikurnai won a Native Title determination in 2010.

This resulted from many years of hard work by a great many people, and was legal recognition of connection to Country and Gunaikurnai rights as Traditional Owners. This led to another stage in the journey, where Gunaikurnai developed a Whole-of-Country Plan which outlines how they wish to manage their traditional lands, including the Alpine national park, which is where Tali Karng is located. You can find the plan here.

There are three key routes leading into the lake, and the most popular one is from Macfarlane Saddle and across the Wellington Plains, past Spion Kopje and Mt Wellington before dropping to the lake via Gillios or Riggall tracks.

Often we think of wild places as being unchanging, locked in time and protected from threats like logging or mining. The lake remains a magical place. But now that Gunaikurnai have Native Title, its place in the surrounding landscape is changing. Camping is no longer allowed near the lake itself, and walkers are encouraged to stay at Nyimba Camp if coming from the north across the Wellington Plains or below the lake in the Valley of Destruction if walking upriver.

In its walking notes, Parks Victoria says ‘Aboriginal people do not oppose non-indigenous people visiting Tali Karng as long as they treat the area with respect. Camping at the lake is disrespectful, so please treat the area with care as you pass by the lake and camp elsewhere’.

‘Tali Karng is a sacred place to the Gunaikurnai and in keeping with their law, Aboriginal people are forbidden to go there’.

There is now also signage as you head towards the lake, so no one can pretend they don’t know that it’s a significant area. We often go into the higher mountains to experience a sense of freedom. How do we temper that desire with the responsibility to respect the very reasonable request that we care for the place, knowing it is sacred to traditional owners?

Judging by the condition of the access tracks, it appears that Parks Vic is encouraging the area to revert to a wilder landscape, allowing tracks to revegetate from 4WD tracks to foot pads, with limited signage and limited facilities (for instance, the toilet at Nyimba camp burnt down and has not been replaced) and apart from signs at key junctions, there are no track markers. 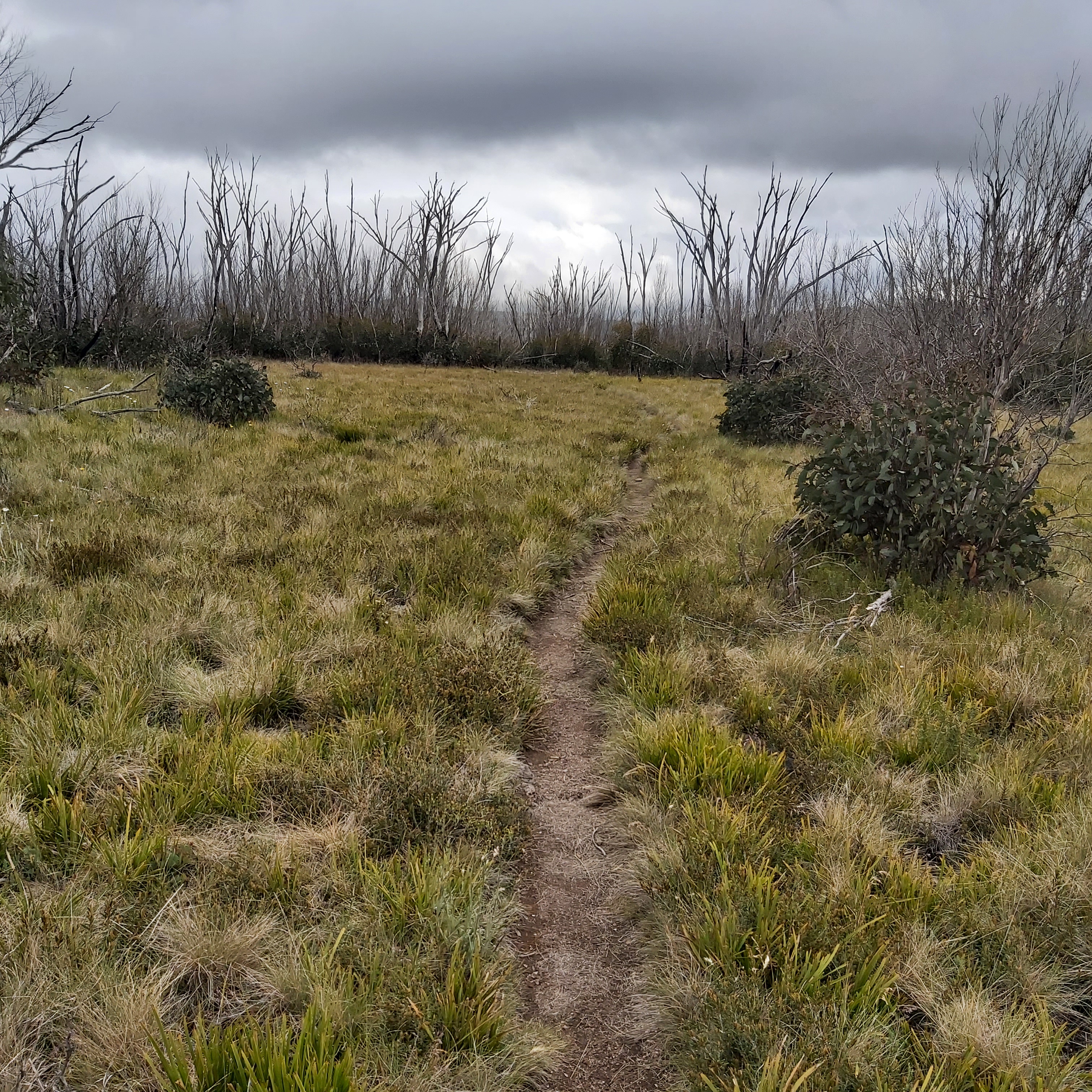 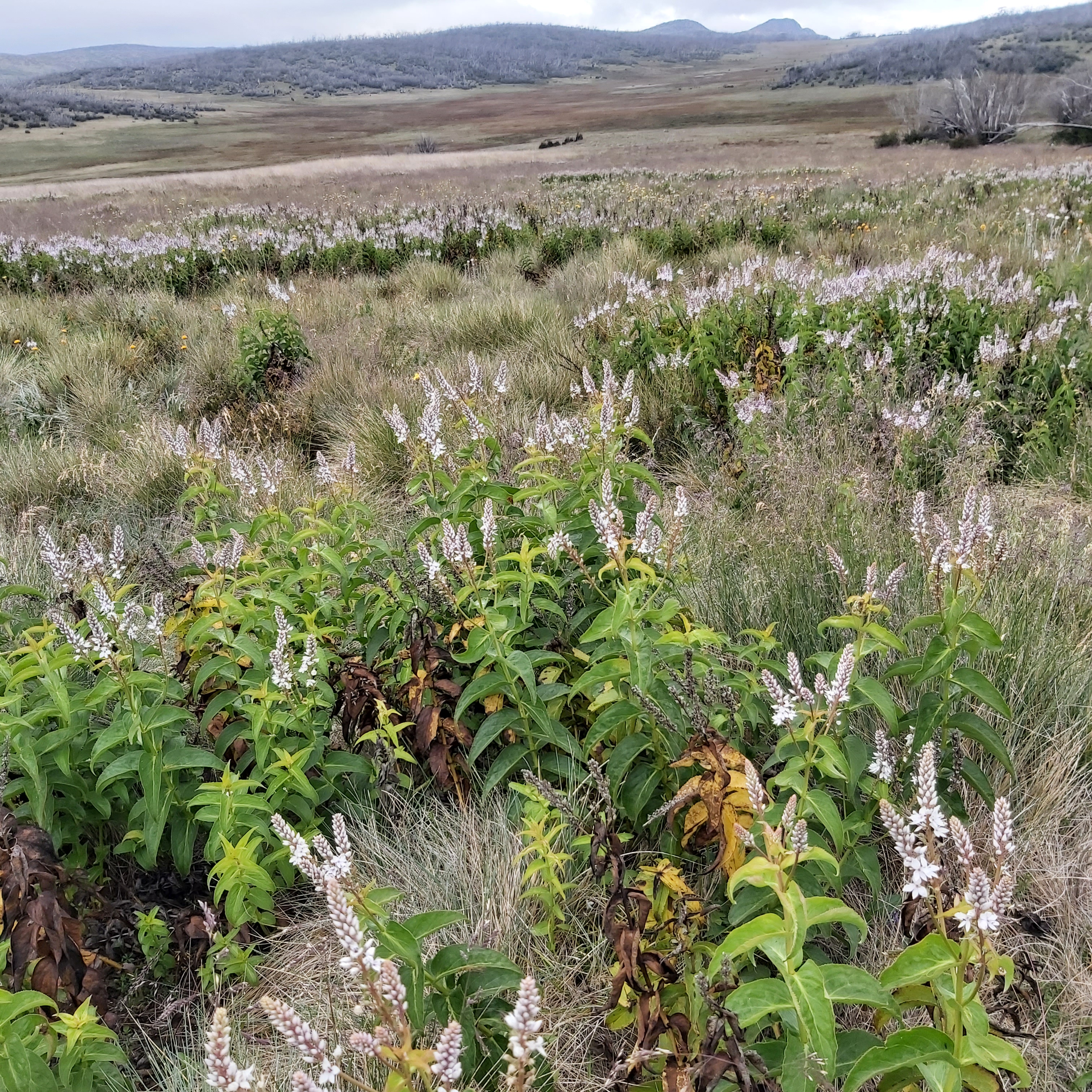 Much of the Wellington Plains and other areas have been badly burnt in recent years, including the Caledonia River fires of 1998, and during the summers of 2002/3 and 2006/7. The devastation of the snow gum woodlands on the Wellington Plains is heartbreaking, as is the slow rate of recovery. It can feel sad and forlorn as you trek across the Plains, although there is a beauty to the landscape as well. The slow rate of recovery is a stark reminder of the threats posed by climate change and fire in the high country, which is pushing some vegetation communities including Alpine Ash and Snow Gums towards ecological collapse.

First Nations people have traditionally been excluded from the histories of the high country. And they are largely absent from the narratives of environmentalists, who often see the high country as a wilderness or unpeopled landscape. That is slowly changing as traditional owner groups reassert their connection to country and now, as a result of the Native Title claims by Gunaikurnai and the Taungurung, First Nations communities are increasingly involved in directly managing land. Other groups, who have not pursued Native Title are also asserting their connections and rights to country.

This is a heartening development and a testament to decades of hard work by First Nations people. As climate change bears down on the places we love, we will need to accept that we need more management of ‘wild’ places, not less. How First Nations people assert themselves in this management, and how the settler walking/ skiing/ outdoor/ 4WD cultures respond to that will influence how well natural places survive the impacts of climate change that are already underway.

There is a good guide to the walk in to Tali Karng available on the Bushwalking Blog.

There are some thoughts on using indigenous names for mountains and other parts of the landscape here.

One thought on “Tali Karng – a jewel in a changing landscape”