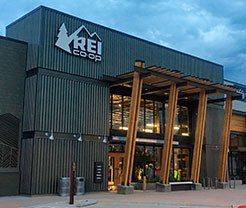 In terms of outdoor retail stores in the USA, REI has an enormous influence. This is both good and bad: it’s ubiquitous presence and huge buying power can threaten smaller, locally owned businesses. On the other hand, it is a co-op which shares benefits back to members, supports some good outdoors initiatives, and provides affordable gear to millions of people.

REI has also taken some significant steps to reduce its environmental impact and has recently released an interesting update on it’s efforts to source all it’s electricity from renewable sources.

“As a co-op that knows that a life outdoors is a life well lived, we have long recognized the connection between energy use, climate change and the health of the outdoor places we love. Healthier outdoor places and a healthier planet can be a global outcome if there’s enough of a shift soon to renewable energy”.

They have been working for more than a decade to shift their energy sources to be fully renewable, while also tackling the question of energy efficiency in their stores and other operations:

“We started more than a decade ago on energy, sourcing 20 percent of REI’s power from renewable energy in 2006. Renewable energy was just becoming available—in fits and starts—and we pioneered with early green power offerings from utilities. We also aggressively focused on energy efficiency, as an unneeded kilowatt-hour of electricity is not only the greenest electricity but also the cheapest. Our continual efforts to make our stores and buildings more efficient has had great success: While our co-op has grown revenue 78 percent since 2008, our energy use (in this case, electricity for power and natural gas for heating) has been nearly flat, growing only 4.5 percent. Our buildings use about 25 percent less energy per square foot than they did in 2006.”

While the public energy debate often focuses on whether energy used is ‘clean’ (renewable) or ‘dirty’ (fossil fuel), energy efficiency often gets far less attention, yet is equally important:

“Over the past decade, our energy savings have contributed more than $20 million in savings to our co-op, allowing us to do more for our members and to support our investments in the trails and parks we enjoy.”

This is an impressive bit of work by a very influential player in the outdoor retail scene in North America. The blog post also provides ideas on how individuals can reduce their climate footprint by sourcing renewable energy.