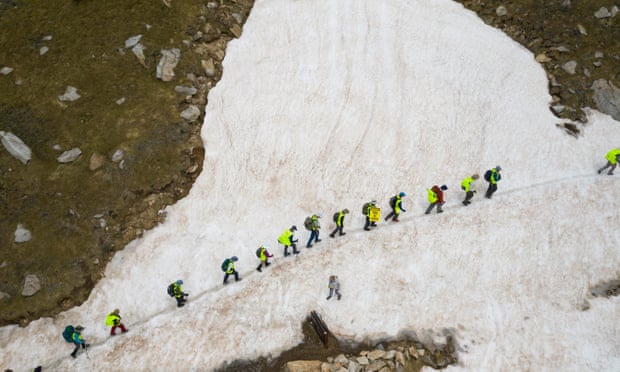 More than 600 people joined sections of the 36 day walk from Sydney to the summit of Mt Kosciuszko which aimed to raise awareness about the negative impacts of feral horses in the Kosciuszko national park. The walk finished on December 9. The five people who did the whole walk from Sydney were joined on the final day by 178 people, walking from Jindabyne, Thredbo or with the main group from Charlotte Pass.

The walk was organised to highlight the fact that there had been an escalation of environmental damage by wild horses over the past 5 years in the park. Instead of acting to reduce wild horse numbers, the NSW Parliament passed legislation that gives wild horses in Kosciuszko National Park more protection than native animals.

For background on the threats, check the Save Kosci website.

As reported in The Guardian, there was widespread support from the community for the walkers. “The Save Kosci convener, Linda Groom, said the group was able to win over most people they spoke to.

“Once they understand the facts, they are quite willing to face the difficult issue of culling horses if we are to control the population,” she said.

One thought on “‘Save Kosci’ walk finishes at Mt Kosciuszko”