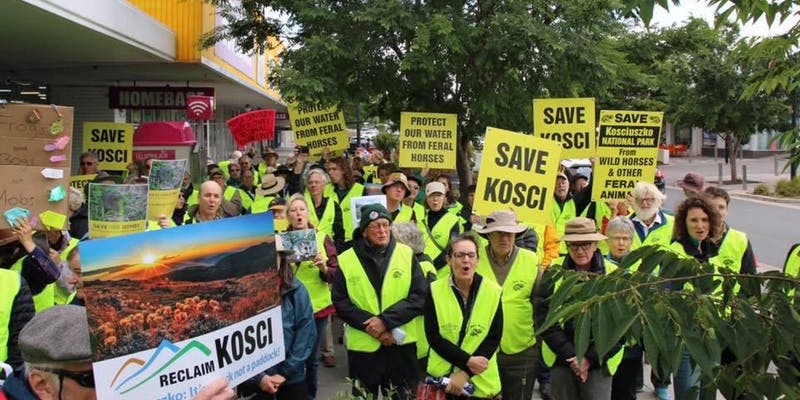 The NSW government’s Wild Horse Heritage Act has undermined 75 years of protection of water and alpine species by treating wild horse populations as a cultural icon that must be protected. Now, the repeal of the Act is is being debated by the NSW parliament following the tabling of a petition of more than 12,000 signatures.

While scientists and land managers are clear in pointing out the negative impacts of the horses, the NSW government has chosen to put politics over sensible land management decision making. The original Bill was proposed by the National Party. The current debate highlights the tension in the Coalition, whereby at least some in the Liberal Party can see the dangers of allowing wild horse populations to flourish in our alpine regions. However, Deputy Premier John Barilaro used the government’s majority to vote against the petition being ‘noted’.

Yesterday, internal tensions between NSW Deputy Premier John Barilaro and environment minister Matt Kean spilt over into the NSW Parliament during a fiery debate on whether to accept a 12,300 signature petition demanding a repeal of the controversial Kosciuszko Wild Horse Heritage Act.

In a wildly inaccurate attack he stated “It is clear that in the general election the issue of the repeal of the brumby bill was perpetrated and campaigned on by people such as Richard Swain and a group from inner city Sydney, Reclaim Kosci, that were paid to campaign against me.”

Whilst the Liberal government did not support the petition, environment minister Matt Kean took a strong stance, stating, “One of the biggest threats to our national parks is feral pests: feral cats, feral dogs, feral rabbits, and let us call them for what they are, not brumbies, feral horses.”

Andrew Cox, CEO of the Invasive Species Council said, “The escalating war between Minister Kean and the Deputy Premier over protecting the environment was on public display.”

“This time Barilaro got his way and used government’s majority to vote against the petition being ‘noted’.”

This was a snub to the 12,300 petitioners, including the 1,013 people who signed the petition that lived in John Barilaro’s Monaro electorate.

Labor’s Trish Doyle, who introduced the petition, and Kate Washington, along with Helen Dalton from Shooters, Fishers and Farmers Party, attacked government mismanagement of water catchments, the lack of action on feral horses and the resulting destruction of threatened species habitat.

Prior to the debate, a powerful coalition of farmers, scientists, retired park managers, skiers, bushwalkers, students and teachers rallied in Hyde Park, urging the NSW Government to take immediate action on feral horses. They were concerned about the effect of sky-rocketing horse numbers on the critically endangered animals and plants living in the park, and the lack of an effective plan to address the problem.