We know that temperatures are increasing around the planet, and that this temperature increase is not uniform – areas at higher latitudes are experiencing a faster warming than areas closer to the equator. We also know that our own alpine environments are being affected by more erratic snow seasons, greater drought and longer fire seasons, and that this is affecting both plant and animal communities. This warming is more apparent at higher elevations.

Australia’s higher mountain ranges are relatively low and located at moderate latitudes. Our alpine zones are often quite isolated from each other, which increases the risk of localised species or community loss if a devastating fire impacts any particular area. We know that the snow line is rising and snowpack is in decline. As the snowline gets higher, warmer conditions will allow species to colonise higher up the mountain zones, potentially meaning that, over time, true alpine vegetation communities are ‘pushed’ off the top of mountains. For instance, recent research conducted by Brodie Verrall and Catherine Pickering from Griffith University found that subalpine grasslands will be impacted by ‘warmer and drier conditions becoming more common and repeat fires in some areas’, (resulting in changes to) ‘the distribution and composition of this and other communities in the Australian Alps’. 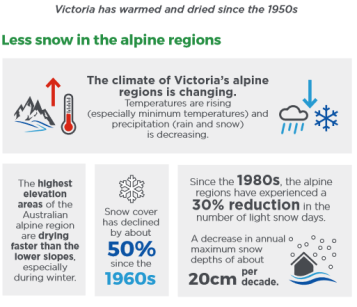 As the story below, published by Adventure Journal, reminds us, ‘alpine tundra can be found around the globe, it is named as such because of its climatic and ecological resemblance to arctic tundra. It’s an ecosystem that is too cold for trees to take root but too warm to be snow-covered year-round. Alpine tundra can occur at any latitude above treeline and below the permanent snow line.

As you move further from the poles and into more temperate regions, alpine ecosystems become isolated to the high mountains where average temperatures are kept low by their extreme altitude’. This is the situation facing our true alpine zones.

Climate change will continue to increase temperatures and affect our alpine environments’. This is both sad and demoralising. But as always, ‘The cure for depression is action’.

As the Climate Changes, the Very Alpine Zone Itself is Rising

This was published in Adventure Journal, and previously posted in Dipper Stories.

It’s late February and a wolverine is moving through the alpine tundra of the Rocky Mountains. She’s hunting, but not for food. Instead, she’s searching for something that has become increasingly elusive in recent years: deep snowpack.

Throughout their range, mother wolverines depend on good, predictable snowfall. It’s not for themselves (unlike bears, wolverines don’t hibernate), but rather for the next generation. Extensive snowdrifts over a meter in depth, compacted and hardened by the elements, provide the perfect setting for natal and maternal denning.

Wolverines grow up to be one of the toughest creatures on the planet, but while they are still young they need shelter and protection from cold weather and predators who may seek them out. Mothers build extensive tunnel systems through the insulating snowpack to give their young a warm and safe welcome into the world.

Without the right snow, however, wolverines simply don’t exist.

As global temperatures continue to rise, these gluttons are struggling. Once widespread throughout the northern states of the US, today they are only found in isolated pockets of Idaho, Montana, and northern Wyoming outside of Alaska.

Unpredictable, infrequent snowfall and early Springs in the alpine are finding wolverines unable to adapt to the fast-changing world. And they’re not alone.

Although alpine tundra can be found around the globe, it is named as such because of its climatic and ecological resemblance to arctic tundra. It’s an ecosystem that is too cold for trees to take root but too warm to be snow-covered year-round. Alpine tundra can occur at any latitude above treeline and below the permanent snow line.

As you move further from the poles and into more temperate regions, alpine ecosystems become isolated to the high mountains where average temperatures are kept low by their extreme altitude. Putting aside factors such as cloud cover or temperature inversion, as elevation increases within the Earth’s troposphere, the atmospheric pressure decreases along with the temperature. Imagine the contour lines of a topographic map representing an incremental rise in temperature rather than relief; the higher you go, the cooler it gets. The Andes, Alps, Sierra Nevada, and the Rocky Mountains, although located in temperate locations, are high enough to contain some of the richest and best-known examples of alpine ecosystems. They are all effectively island ecoregions in the sky.

Creatures of the high country have been shaped and sharpened over millennia, much like the glacial valleys themselves, to suit their surroundings. Ptarmigan, ibex, wallcreeper, and mountain goat all make a living amongst the snow and boulders where, for us, it would be difficult to image anything surviving.

Many of these creatures are ice age holdovers; born when much of the world was cover by white. As the climate slowly warmed over thousands of years and the ice retreated to the poles, many species were left marooned in the only place where arctic-like conditions remained year-round: the mountains. And there they have remained, largely cut off from the rest of the world.

Today, however, even these lonely places are no longer safe.

As the mercury inches its way every higher year after year, so too does the altitude at which alpine conditions can exist.

In the future, we may find that many species which evolved in more temperate climates may be able to adapt or find refuge elsewhere in our rapidly changing world. But for those of the alpine, we are already discovering some harsh realities: birth cycles are out of sync with fresh Spring growth, snowpacks are more sporadic and weak, and trees are beginning to take root and degrade habitat where once there was only tundra. What follows is malnutrition, high infant mortality and ultimately regional extinction for many flagship species such as the snow-white mountain goat and their neighbors.

There may simply no longer be any mountain high enough, with nothing but sky above.

Pacific Islands nations being slowly swallowed by rising seas are a tragic and dramatic illustration of the effects of man-made climate change. The receding glaciers, too, provide a clear indication of what our future may look like should we choose to not change our ways. But there are other canaries whose silent songs of warning from the mountains remain an unheard chorus. And that silence is becoming ever more deafening.

I’m just back from a climb into the alpine myself, albeit a long way from the Rockies. In the Swiss Alps, far above treeline, I stumbled on a group of ibex with kids silhouetted on the skyline. A ptarmigan broke cover in a boulder patch and a crimson flash revealed a pair of wallcreepers on a high granite rockface.

As the tide of heat continues to rise, I hope that the mountain wild will continue to find shelter between the peaks and crags of the remaining alpine tundra.

Sometimes evolution can indeed be a trap. Let’s hope that we can help these creatures of the high country avoid this snare that evolution, circumstance, and man have set for them.