Fire, disaster, and the long road to recovery on the Toorongo plateau

If you’ve ever been to the Baw Baw ski village from Melbourne, you will have driven under the southern fall of the Toorongo Plateau. As you climb out of the Loch River valley into higher country around Icy Creek, a big bulky mountain looms over you. Heavily forested, the southern slopes of the plateau are impressive. The north side, hidden from view from the Baw Baw road, slopes gently away from the summit ridgeline towards the upper Yarra River valley. It is a ‘production’ forest, having been logged for many decades. It has also been hit by multiple fires, and this is some of the story of it’s recovery. 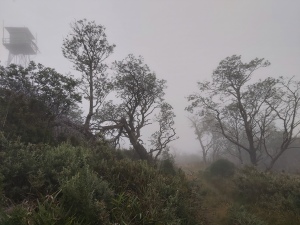 Many years ago, there was a small community on the western end of the Toorongo Range. I lived there, on and off, for seven years. The mountain was our backyard and we used to often wander up into the hills. The higher reaches were covered by a remarkable ‘cloud forest’ of low, dense woodland, dominated by wattles and Myrtle Beech. Lyrebirds dug through the open understory, and grey boulders dotted the forest floor. The highpoint of the range was Mt McDonald, now called Mt Toorongo, where there was a fire lookout tower and old cabin for the lookouts. It was just on the treeline, where the low trees gave way to grasses, sedges and flowers.

One day, while walking the peak, the silence was broken by the sound of heavy equipment. We stumbled on a huge area in the process of being bulldozed. We called departments and politicians, trying to find out what was going on. Despite our best efforts, much of the top of the range was scraped back to bare earth, the dying trees pushed into windrows and burnt. The lyrebirds were gone. After one last night on the mountain, I left, and didn’t return for several decades. I couldn’t cope with what had happened.

We knew some of the story about why the cloud forest was there: multiple fires had killed the eucalypts that used to dominate the plateau and range, and this was a government program to ‘restore’ the forests so they would once again yield trees for industry. To us, taking a longer view, we could see that over time a mosaic of forest was being created, some of which would cycle back into forests dominated by Mountain Ash and Alpine Ash. We were told by some contractors that the Shining Gums being planted there were from East Gippsland. I never got to the bottom of that story.

Fast forward many years. I’ve now been back to Toorongo twice. I’ve taken solace in the fringe of rainforest on the top of the mountain that they didn’t bulldoze, and the vigorous regrowth on the slopes. I am grateful for the 7 lyrebirds I saw in the space of 20 minutes, and for those long views from the summit to Baw Baw, the Latrobe Valley and Strzelecki Ranges. The forest is coming back, in a time frame different to the one nature would have pursued if humans hadn’t intervened. And now I know more of the human story: The Department of Environment, Land, Water & Planning Victoria (DELWP) have released a 20 minute video, The Reforestation of Toorongo Plateau, which outlines the ‘Forest Restoration Project’ that saw the plateau reforested.

The blurb from DELWP says: ‘Many years of experience and science in forestry management tell us that if Ash forest is killed at less than 15-20 years of age, it’s chance of recovery are low. However, with over a century’s worth of knowledge in post bushfire recovery, forest managers are able to respond and resow large areas of Ash forest relatively quickly. A fascinating case study at Toorongo Plateau demonstrates the effectiveness of reforestation methods in modern day forestry management’.

In 1926, 1932 and 1939, the Toorongo Plateau was burnt. As we know, Ash forests are often killed by intense fire, and generally need 15 to 20 years between fires for seedlings to grow old enough to produce seed. Closer fire frequency can eliminate parent trees, leading to a transformation of the forest. Where there had been Ash trees up to 100 metres in height, ‘hellish’ fire events led to a wasteland where grass dominated parts of the landscape. Other areas became dominated by Montane Wattle (Acacia frigescens) and others such as Blackwood and Silver Wattle. This was the ‘cloud forest’ we came to know.

According to the video, narrated by Wally Notman, and featuring Peter Fagg, a forester and Owen Salkin, a fire behaviour specialist, work on the plateau started in the 1980s. They say that fires even before the 1920s had impacted the plateau, with miners burning the bush from the 1870s onwards.

The aim of the Forest Regeneration Project was to restore the ecosystem that had been there before the devastating fires. The aim was to remove vegetation, and plant seedlings that could then be harvested in 50 to 80 years time. These forests are now roughly 30 – 40 years old. Species selected were based on what had been there before – Mountain Ash and Blue Gum (the Blue Gums were found to be too frost sensitive, growing in the open and were dropped from the program). At higher elevations, Alpine Ash and Shining Gum were planted. The video states that these species had all existed in the area before the fires. Rabbits were a significant problem early on, and in some areas, fencing was required to exclude them.

They ploughed the open areas to get rid of grass and other low growing species. From memory, the cloud forests were pushed down by bulldozers using heavy chains. In these areas, Nothofagus (Myrtle Beech) trees that had been killed in earlier fires had been resprouting from epicormic shoots and some of these survived the destruction of the canopy. Now they are expanding their presence through wind blown seeds from trees that had survived. As they grow, they create a microclimate, which is suitable for further growth of seedlings (reminding us of the need to protect the eucalypt dominated buffers around stands of cool temperate rainforests from fire).

After the 1939 fires, the Montane Wattles took over on higher areas. I wonder how often these trees turn into one of the dominant canopy species? (I can think of a similar situation on Ben Cairn near Warburton). As noted in the video they hold much less carbon than Ash trees. The figure cited was about 200 tonnes/ ha above ground, versus around 1,000 t/ha for eucalypts. The video highlights another area (Cone Hill) where old Silver Wattle had become dominant. At 50+ years of age, the trees were starting to collapse, and before it was cleared and replanted with Mountain Ash, was becoming dominated by Musk Daisy Bush.

I thought it was interesting to hear Owen and Peter reflect on the restoration work. The Project was developed to make forests ‘productive’ – that is to be regrown with commercial species, then harvested for pulp and timber. But with the state government commitment to ending native forest logging by 2030, these forests won’t end up being logged (assuming a future government doesn’t overturn the phaseout). They note that these forests have value for the carbon that they are storing, for biodiversity and water. Long may it be so!