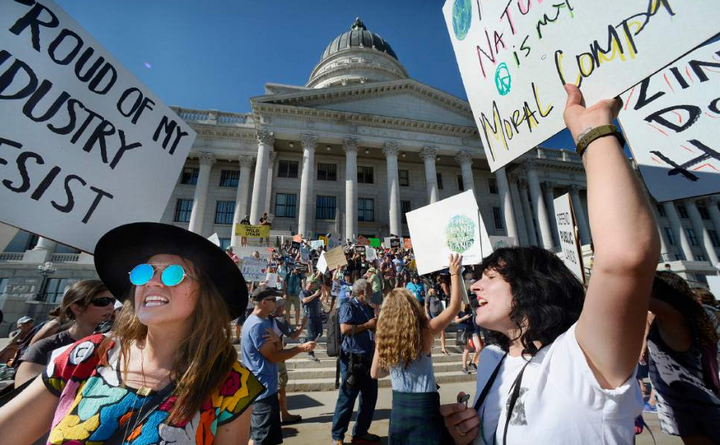 If you enjoy the outdoors – riding, walking, climbing, paddling, skiing – then it makes sense to protect wild places. The most obvious way to do this is to join or support groups working to protect the areas you love. And if you love winter, then its logical to support initiatives to slow climate change.

As individuals we have some power. When we join our efforts with others through working in organisations we increase our influence. When it comes to protecting the environment, another potentially powerful force is business. The outdoor and snow industries in Australia generate billions of dollars of income and employ tens of thousands of people. Yet they are largely missing in action when it comes to protecting the environment.

In some other countries, these industries are stepping up and putting their shoulders to the wheel: with some interesting outcomes.

Mountain Journal recently reported on the fact that Patagonia has been uniting the outdoor industry in the USA to oppose the agenda of Donald Trump and his allies in conservative western states who want to reduce federal protection for many wild places. While some companies have a track record of sustained activism, what is really heartening is that more and more companies are joining the campaign to push back against the anti-environment agenda of Donald Trump and his allies.

This was shown this week when

“Hundreds of outdoor industry representatives and their supporters took to the streets Thursday for a rush-hour hike to the Utah Capitol, celebrating the crucial role public lands play in their livelihoods and urging the state’s leaders to lay off what critics say is an attack on those lands”.

As reported previously in Mountain Journal, the Outdoor Industry show is likely to move from Utah to Colorado because of the anti environment policies of the Utah government.

“Outdoor Retailer trade show is holding what may be its final Salt Lake City edition. The massive twice-a-year show is decamping for Denver after a 22-year run that is ending amid an acrimonious argument over Utah leaders’ drive to reverse the Bears Ears and Grand Staircase-Escalante national-monument designations”.

Beyond threatening to move states (taking the estimated US$45 million that the show brings with it), the recent show saw an unprecedented street march by people who were attending the trade event. As was reported in the Salt Lake Tribune,

“I believe the biggest danger to our united, overwhelming support for public lands is to allow others to paint this — cynically — as a partisan issue. It is not. And we cannot allow that to happen,” REI CEO Jerry Stritzke told the boisterous throngs of outdoor enthusiasts who see a grave threat in policies coming from Washington. “We cannot allow ourselves to fall into that trap, because public lands are for all.”

The threat to climate and environment posed by Donald Trump and his ‘business as usual’ approach to fossil fuel pollution, attack on environmental protections, and withdrawal from the global climate agreement, means that all good people need to be active. This recent politicisation of a broader cross section of the outdoor industry beyond the usual suspects is necessary and welcome.

Australia faces the threat of a mega coal mine in Queensland, the potential death of the Murray Darling system, ongoing threats to forests in popular outdoor recreation spots like the Tarkine in Tasmania, the Central Highlands and East Gippsland and even private developments that will impact a well known climbing spot in the Blue Mountains.

Imagine if the outdoor industry here also got vocal and active in the way their counterparts in the USA seem to be.