The news is really scary at present. Here are a couple of examples:

Closer to home, research recently published in the journal Nature Climate Change describes a series of ‘sudden and catastrophic ecosystem shifts’ that have occurred recently across Australia. These changes, caused by the combined stress of gradual climate change and extreme weather events, are overwhelming ecosystems’ natural resilience.

While coverage of this research has tended to focus on the impacts on the Great Barrier Reef, other examples – about Gondwanic forests in Tasmania and Alpine Ash forests in the Australian Alps – should be a wake up call for people concerned about mountain environments.

According to a report on the research published in The Independent,

‘Australia’s average temperature (both air and sea) has increased by about 1C since the start of the 19th century. We are now experiencing longer, more frequent and more intense heatwaves, more extreme fire weather and longer fire seasons, changes to rainfall seasonality, and droughts that may be historically unusual.

The interval between these events has also shortened, which means even ecosystems adapted to extremes and high natural variability are struggling. As climate change accelerates, the magnitude and frequency of extreme events is expected to continue increasing’.

The researchers, who include Rebecca Harris, David Bowman and Linda Beaumont, identified ecosystems across Australia that have recently experienced catastrophic changes. The ones relevant to mountains are:

The research paper, ‘Biological responses to the press and pulse of climate trends and extreme events’, appeared in Nature Climate Change volume 8, pages 579–587 (2018).

Destruction of Gondwanan refugia by wildfire

Mountain Journal has published extensively on this in the past.

The research report notes that lightning storms ignited a number of fires in central and western Tasmania in 2016, which ‘threatened the core refugia of Gondwanan vegetation, particularly the largest stands of the endemic conifer Athrotaxis cupressoides’ (Pencil Pines). Burnt Pencil Pines are unlikely to recover ‘given their slow growth, limited seedling establishment and projections of increased fire weather and lightning ignitions associated with drier soils.’ Pencil Pines are already limited to very small areas of Tasmania, especially in mountain environments.

The frequency and severity of high fire danger weather in south-eastern Australia has increased with recent warming and drying. The researchers note that ‘in this case, the increasing press of a changing climate resulted in the emergence of novel pulse events’. Overall background warming and drying has created soil and vegetation conditions that are conducive to fires being ignited by lightning storms in regions that have rarely experienced fire over the last few millennia. ‘This pulse fire event led to the loss of ancient conifer communities and the destruction of organic soils that are unlikely to redevelop under future drier and warmer conditions’.

Although the climate of western Tasmania has not changed very much, as yet, as a result of global warming, the incidence of dry lightning strikes has increased markedly from last century to the present. Therefore these type of lightning caused fires are expected to increase. This could put the very survival of Pencil Pine communities at risk.

How can we reduce the likelihood of ecosystem collapse?

The researchers identified the following management options to reduce the likelihood of the complete loss of these Gondwanan remnants:

There is a significant message that should terrify anyone who loves the wild landscapes of Tasmania: “fires have been philosophically disruptive to the notion of a self-perpetuating natural system free of human modification (a ‘wilderness’), which is a core value of the Tasmanian World Heritage Area (TWWHA)’.

Ie: we have so modified the climate that we have impacted on fire regimes to the extent that the remaining Gondwanic remnants very survival is threatened unless we intervene. 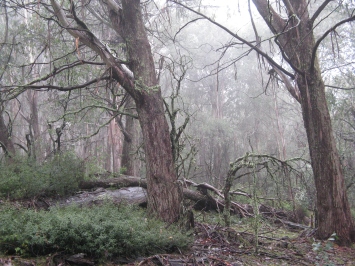 As has been previously reported by Mountain Journal, ‘there is no doubt that our fire seasons are getting longer and more intense. In the south east, in terms of massive fires (greater than 250,000 ha), Victoria experienced two such events in the 19th century and five in the 20th century. In less than two decades, we have already had three mega fires in the 21st century.

This is starting to have potentially landscape changing impacts. There is concern that alpine ash forests could be wiped out in some valleys where fire comes in multiple waves before the recovering trees can set seed. Parts of north eastern Victoria have been burnt three times in a decade’.

The research report goes on to note that:

‘Since the beginning of the 21st century a series of very large, high severity landscape fires ignited by dry lightning storms have occurred throughout the Australian Alps. These fires have killed swaths of E. delegatensis forest and initiated regeneration. However, large areas of regeneration have been reburnt, in some cases twice, causing population declines or local extinction.

Previous periods of high frequency fires (e.g. fires in 1926 and 1939 at Lake Mountain in Victoria) caused the conversion of E. delegatensis forest to Acacia obliquinervia shrubland. The scale of the current vegetation type conversion appears to be historically unprecedented, driven by recent warming and drying, which is projected to continue with ongoing climate change.’

An increased frequency of extreme events can also lead to population collapse if the population does not have sufficient time to recover before the event recurs. Multiple wildfires in short succession, resulting from increased dangerous fire weather, have resulted in localized conversion of obligate seeder Eucalyptus delegatensis forest to shrubland in the Australian Alps, a process that potentially threatens the entire species’ range’.

The problem is that Alpine Ash need around 20 years to reach reproductive maturity, so if fires happen more frequently than this, local extinction is possible because there is no seed stock to create a new forest.

Recent increases in minimum and maximum temperatures and reduced annual rainfall have occurred since the beginning of the 21st century and there has been an increase in large forest fires ignited by summer dry lightning storms, with some models suggesting an increase in lightning ignited fires under global climate change. Drier conditions are likely to lead to more intense radiative ground frosts, exacerbated by reduced snow lie. These trends are projected to increase throughout the century if greenhouse gas emissions are not mitigated in the near future.

A combination of high fire weather conditions and dry lightning storms resulted in extensive wildfires in 2003, 2006, 2009, 2013, 2014, burning over 97% of E. delegatensis distribution, in some case reburning areas two to three times. A large proportion of E. delegatensis populations are currently in an immature stage following the 21st century fires, rendering most populations vulnerable to local declines or extinction if reburnt, with consequent conversion to non-forest. The capacity of the species to recover is constrained because hotter and drier conditions reduce tree growth, seed production and seedling establishment

The capacity of E. delegatensis to adapt to climate change by moving upslope is constrained given competition with E. pauciflora (snow gum) woodlands that have strong vegetative recovery following wildfire’.

This is not ‘new’ news. For instance, areas within the Harrietville fire boundary in 2013 have been burnt several times over the past decade and Department of Environment and Primary Industries and Parks Victoria ecology experts predict about 2,000 hectares will not be able to naturally regenerate due to the nature of Alpine Ash and its response to fire when it becomes so frequent.

How can we reduce the likelihood of ecosystem collapse?

There are a number of management responses that are possible –

For anyone who loves the wilds of Tasmania or the Australian High Country, this is grim news. This is information we need to deal with. The key thing is to act. We still have time to avert the worst of the climate change that is coming. But only if we act now. There are many options for getting involved. Find your place and put your shoulder to the wheel. Time is short. But as always, action is the antidote to despair.