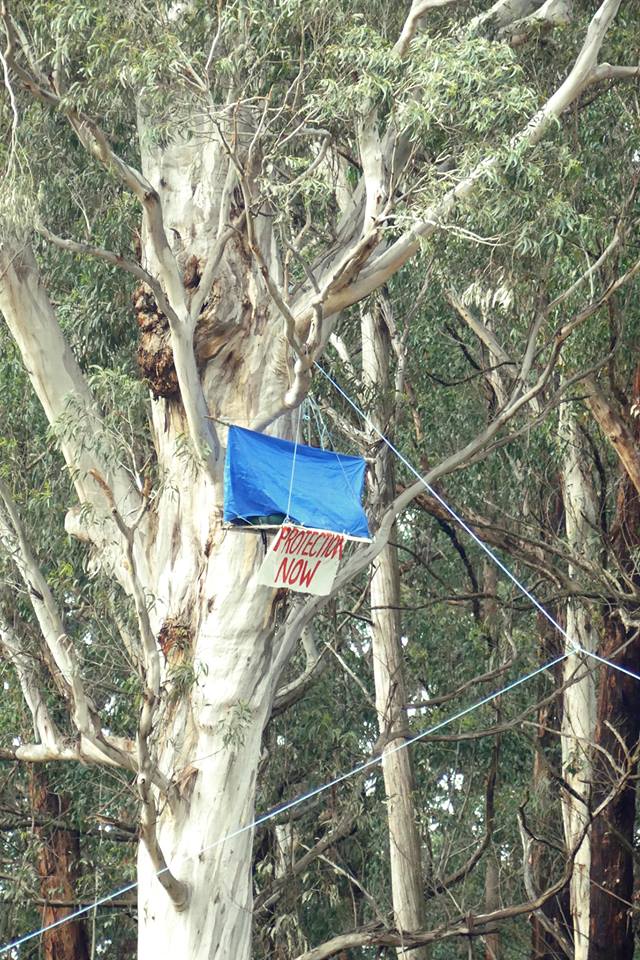 Conservation group Forest Conservation Victoria have announced that they have established a blockade of logging operations on the southern slopes of the Baw Baw Plateau. The area contains many large trees which provide critical habitat for threatened native wildlife.

“Yesterday we started a blockade on the Southern slopes of Mt Baw Baw where logging has been stopped for the second day. A brave conservationist remains on a suspended platform 20m off the ground in a tree tied to logging machinery. We intend to maintain the forest protest for as long as possible.

The area of forest, which has been partially cleared, contains many large trees which provide critical habitat for threatened native wildlife. We are protesting the ongoing destruction of Victoria’s native forests, of which little remain in the Central Highlands. This is the second blockade in the area in the last two months. We are calling on the Labor government to implement protections for the last remaining areas of intact forest.

These forests not only provide homes for threatened species, but are also some of the largest carbon stores in the world. An overwhelming majority of Victorians want to see the government take stronger actions to prevent climate change. Protecting these forests plays a large part in sequestering carbon and reducing our emissions.

Over the past 2 days we have heard yellow-bellied gliders, koalas, and have seen a greater glider in the coupe. These species are becoming increasingly threatened and when their habitat is logged they don’t survive. If the Labor government doesn’t step in now, we will lose these species forever.

It is ludicrous that Labor has not been acting in the best interests of all Victorians and that the logging industry has more protection than our forests, climate, water and wildlife. Everyday citizens are now having to step up and take action where our government has failed.

We have a very short timeline to take meaningful action to prevent climate change and it is a matter extreme urgency. Our government needs to be taking this more seriously, with so little of these forests left they can’t afford to continue allowing them to be logged.

Government owned logging agency VicForests, who are responsible for all native forest logging in Victoria, are destroying our forests in the face of climate emergency, drought, intensified bush fires, and species extinction. We will continue to take action to ensure these areas get protected and are urging the Labor government to step in immediately”.