Before the 2009 Black Saturday fires, the forests around Cambarville, to the east of Marysville in the Central Highlands of Victoria, were a paradise. The area was dominated by ancient mountain ash forest, with trees up to 85 metres in height, and Nothfagus dominated rainforest that was as fine as anything you could ever see in Tasmania. The Leadbeater’s Possum was rediscovered in the area in 1961.

This was once a location of a logging village and sits as an important ecological link between the Lake Mountain Plateau and protected water catchments to the south. While the 2009 fires didn’t burn the entire area, it has been greatly changed by those fires, with the loss of significant areas of rainforest and old growth ash.

Now, there are plans to allow logging close to the Cambarville area. This will further fragment this highly significant forest.

Please contact the Victorian Minister for Environment, Lily D’Ambrosio, urging her to act immediately to stop these coupes from proceeding.

We will add extra details about what is planned, and what the likely impacts will be, shortly.

The image above is of logging close to Cambarville, taken in 2017.

The map below is taken from the list of approved coupes on the state government’s Timber Release Plan, January 2017. Thanks to Christian Lewis for putting in the extra details. 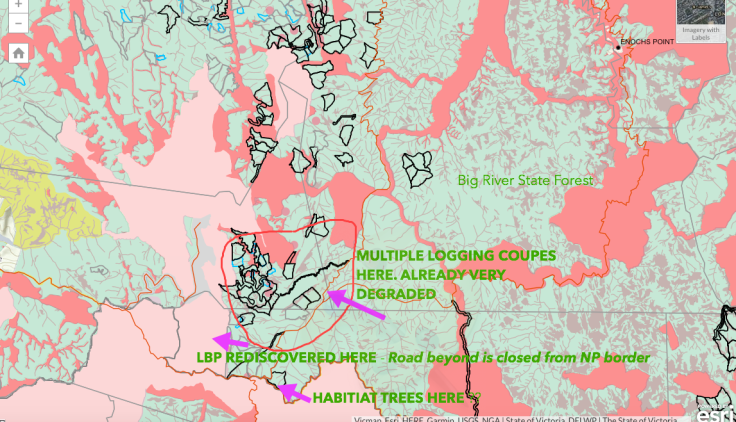 One thought on “Logging planned near Cambarville”