The long debate over feral horses in alpine areas was derailed by a decision taken by the NSW government to protect rather than limit wild horse populations in Kosciuszko National Park. It was clear that this would lead to greater environmental damage in precious alpine areas.  Now Freedom of Information documents show that horse numbers have ‘risen dramatically’ since all horse control was halted in the park 20 months ago.

The following information comes from the Invasive Species Council.

The feral horse population in Kosciuszko National Park has risen dramatically since all horse control was halted in the park 20 months ago, Freedom of Information documents reveal. 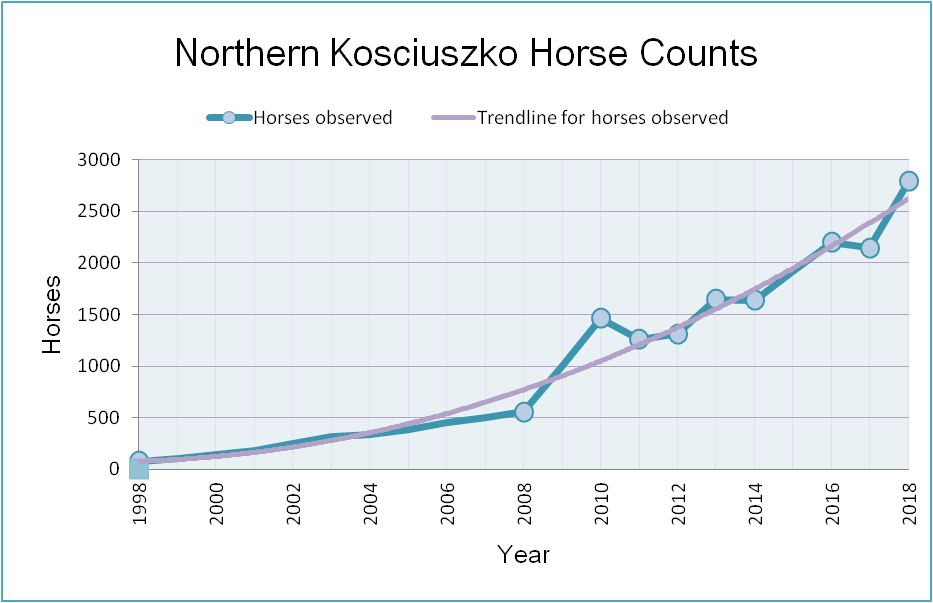 “It has been almost a year since the Kosciuszko Wild Horse Heritage Act went through NSW Parliament and we’ve seen absolutely nothing but excuses for inaction from the NSW government,” he said today.

“By refusing to implement a horse management plan Deputy Premier John Barilaro and the NSW government are only making the problem bigger. How many more hundreds of unwanted foals are going to be born before they decide to act?”

The horse count data shows the number of horses sighted from the air over the northern end of the park doubled in just six years. In the past year alone since trapping stopped there has been a 30% increase in horses observed.

Horse counts in the Big Boggy area in the southern end also show a doubling of horse numbers over six years. This growth is corroborated by a similar increase in horse dung counts in the same area.

“Feral horses are trampling and destroying the springs and waterways of the high country. There are endangered species such as the broad-toothed mouse losing their habitats because of this damage.

“Feral horses have no predators in Kosciuszko, and their numbers will continue to rise until they reach a limiting factor, most likely starvation or malnutrition. Many native animals will suffer a similar fate as the horses remove their food sources and shelter.

“The NSW government needs to act now and take a stand to reduce the horse population, for the protection of the park and the welfare of the horses. The time for delays is over.”

Each year the NSW National Parks and Wildlife Service conducts a count by helicopter of all feral horses observed in the northern end of the park.

This yearly count relies on horses sighted while overflying areas known to have horses. It is not as systematic as the five-yearly, large-scale count of Kosciusko in NSW and the Alpine National Park in Victoria, currently underway.