uranium mining in the Victorian Alps? 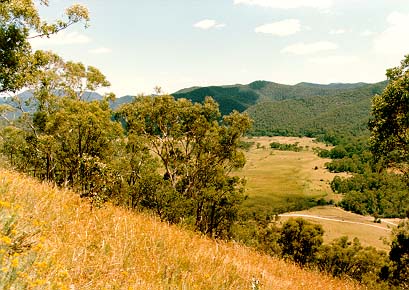 Now, here’s a serious blast from the past (apologies for the bad pun). While looking through some old files I found an article from 1978 from the Friends of the Earth (FoE) magazine, Chain Reaction (number 4(1), 1978) about the threat of uranium mining in the Victorian Alps.

Back in the mid 1970s, a German company called Urangesellschaft had exploration rights to a very large area of the Alps, from near Tolmie near Mansfield, right down almost as far as Bairnsdale. They had a total of almost 6,000 square kilometres of land under license and this included the Avon wilderness area and large sections of the Wonnangatta valley.

In April of 1978, the Australian partner in the venture, the Northern Mining Corporation, announced that uranium deposits had been found which could be of “possible interest.” On questioning, the company admitted that it was keeping the issue ‘low key’ in order to not arouse public interest. FoE met with the German company, who admitted that they were concerned about protests. Of particular interest locally was the fact that some exploration activity was happening in the Eildon Catchment and there were fears about contamination. The senior geologist for Urangesellschaft explained that this wasn’t going to be an issue because ‘natural seepage’ already occurred in the area. 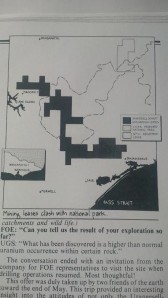 After test drilling, the company announced that it had found ‘higher than normal uranium occurrence in certain rock’.

Needless to say, groups like FoE raised the alarm. It was debated in parliament.

This was back before Jeff Kennett’s forced amalgamations of local Shires. Mansfield Shire had some support for the mining proposal. The Shire Secretary, Mr Cairns, was quoted as supporting uranium mining “if it was for the good of Mansfield.” The Premier of the day, Rupert Hamer was in support (he was also promoting the development of a major copper mine near Benambra at the same time). It turned out that there were six companies with exploration licenses for uranium in the state. This was a time when there was a serious proposal to build a nuclear reactor on French Island in Western Port Bay, and community groups were getting organised against the threat of a nuclear industry in the state … Eventually, it seems that Urangesellschaft backed off, and the rest is history. Thankfully there’s no uranium mines in the Victorian high country.