On May 1, an alpine ecology workshop was held at Dinner Plain, which had a focus on alpine peatlands.

The day was supported by a range of groups and featured fantastic presentations from peatland experts, followed by a wander and chat through some of the peatland systems that exist in Dinner Plain. It brought together locals, people interested in alpine ecology from the broader region, and a wonderful cast of experts. One of the key messages I took from the forum was that fire is a grave short-term threat to peatlands and already impacting widely on this vegetation community.

Dinner Plain sits on the traditional lands of the GunaiKurnai and Russell Mullett provided an Acknowledgement of Country and fascinating presentation on First Nations long occupation of the High Country.

There are three types of peatland in the mountains:

Peatlands exist in the higher mountain country from Baw Baw in the south well into the northern Snowy Mountains. In the north east of Victoria there is around 2,000 ha of alpine peatlands, which are generally wet areas that are waterlogged, where peat is building up the soil profile. The soil is organic, as opposed to mineral in structure, and builds up very slowly. 1.5 metres of peat may take 5 to 6,000 years to form. They generally form where there is a ‘good supply of groundwater and impeded drainage keeps the water table at or near the surface.’ Key areas across the Alps include Baw Baw, the Snowy Range area south of Mt Howitt, the Dargo and Bogong High Plains, and Cobberas area. Peatlands exist in the headwaters of our major river systems. On average, 38% of stream flow into the Murray Darling Basin comes from the north east of Victoria, and peatland is important for slowing the flow of heavy water events and producing clean water for the rivers below. As noted by North East Catchment Management Authority (NECMA), ‘the health of alpine peatlands will influence the health of water further down the catchment.’

Image source. Taken from the National Recovery Plan for the Alpine Sphagnum Bogs and Associated Fens.

Phillip Falcke from the North East Catchment Management Authority said that key stresses on peatlands in north east Victoria are:

Bushfires in 2003 damaged a lot of the alpine peatland. Around 40% of alpine peatlands were impacted by fire over the summer of 2019/20. In total, around 90% of alpine peatlands have been affected by fire. There are now some significant recovery programs that target damaged areas. The Cross-regional Alpine Peatlands Protection Project was established in 2019 and will run until 2023. It is carrying out control of invasive plant species, controlling deer, and monitoring the health of peatlands. In some areas it is limiting access to peatlands to reduce trampling. The project is deepening our understanding of how peatlands work, how they are impacted by externals stresses, and how to do our best to ensure their survival. Check here for further details on NECMAs work on alpine peatlands.

Fire fighting around peatlands needs to carefully consider how fire is tackled. Peatland is very susceptible to inputs by chemicals and flame retardant shouldn’t be used in peatlands. It also needs to consider how the peatland sits in the surrounding landscape – for instance what sort of vegetation exists around the peatland. Peatlands should be treated as a priority in decision making about allocation of resources when fires are burning at a large scale.

Associate Professor John Morgan from Latrobe University noted that fire is the biggest immediate threat, and causing long term change. Sections of peat on the Buffalo plateau have burnt two and three times in the last 25 years, and some systems have changed profoundly as a result. Because it takes so long for peat to form, recovery is also slow. Different types of peatland are affected differently (eg those dominated by shrubs burn more easily) as do different plants: myrtacae can recover quite well, while heaths such as the Candle Heath are often very badly impacted by fire. The unburnt refuges become more important over time, and need to be protected.

Climate change in the Alps means less water, which increases the likelihood of specific peatlands drying and hence changing and also burning more frequently. According to John, peatlands will be resilient to change ‘to a point’. With gradual drying in recent decades and a significant deficit in rainfall since 1998, this drying needs to be monitored and may require additional action by land managers. One example might be in the case of the Silky Snow Daisy, which tends to live around the margins of peatlands and is expected to decline as water becomes less available. We could choose to intervene and provide more water into specific peatlands to help this species, but this would obviously come at economic and potential ecological costs.

There is no doubt that the many threats outlined above threaten the future of the three types of mountain peatlands. Associate Professor Ewen Silvester from the Centre for Freshwater Ecosystems noted that some peatlands are still growing, so it is not just a tale of doom and gloom. Other speakers noted that there are good programs in place to monitor, protect and restore peatlands. As Ewen noted, ‘we still don’t fully understand the impacts of climate change on peatlands’ and while the longer-term outlook is ‘very uncertain’ and ‘change is inevitable’, a take home message for me was that we need to continue to fund, and extend, the existing programs working to protect alpine peatlands. 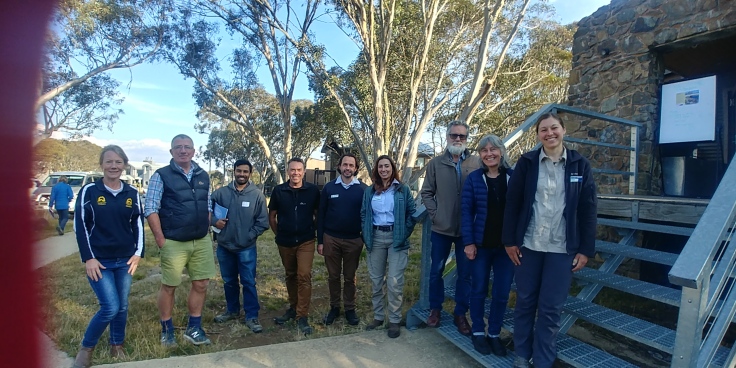 The Alpine Ecology Workshop was supported by Benambra-Dinner Plain-Omeo Landcare Group, Mt Hotham Alpine Resort Management and the North East Catchment Management Authority, through funding from the Australian Government’s National Landcare Program and the Into Our Hands Community Foundation. Input into the event was further provided by Zoos Victoria, Parks Victoria and Latrobe University.

Other topics covered during the forum included Mountain Pygmy Possum and Broad Tooth Rat recovery programs, and environmental management by Mt Hotham Alpine Resort Management, which will be covered in a later Mountain Journal post.

One thought on “Alpine Ecology Workshop”