Something craggy and life priorities

Antony von Chrismar describes a mission to the Main Range with long time friend Lach to ride big lines on the western face. “The stoke was high … a rare treat it was to slay such perfect stable powder on a complex Aussie mountain face.” 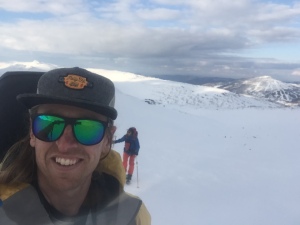 Life had got complicated fast and priorities had shifted for Lach, a life-long mate and new father, but the underlying froth for snowboarding was evident in the weeks leading up to his leave-pass weekend.  Young Jack was put to bed… we hit the road.

It was a narrow weather window, there had been a recent storm and crystal balling the forecast indicated a half day with a high freeze level front and possibly white-out fast approaching.  It wasn’t an ideal weekend to be heading out in honesty, so we prepared for the worst and made the most… 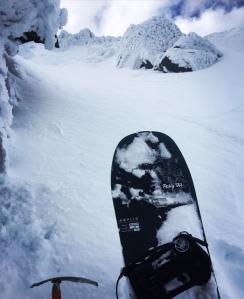 We rounded the Twynam dome; the shredable lines of the Siren Song face emerged from the rolling landscape – somehow impressing on-lookers even after repeat visits.  Rocks were rimed, snow was scoured and the best face to ride was still being juggled in the mind.  We approached the Knoll and new hints appeared – unexpectedly, consistent patterns of wind loaded powder of 20-30cm depth became evident.  The juggled balls landed and lines to ride suddenly became clearer – some gems were in the mix for sure!

We skinned on and one particular face likely to be on was mentioned, a mountain face that requires caution – it was wind-loaded, there are rock bluff hazards below, and you end up in a remote corner far from any rescue team. There was apprehension in Lach’s response…..a shift from previous trips we’d been on – I could tell he was thinking of young Jack smiling his 9 month old smile. With the front approaching, we needed intel and we needed confidence of a safe return to family. 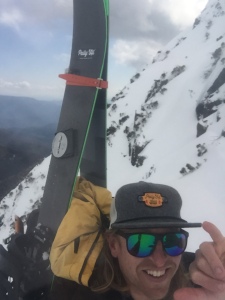 We scoped and talked through hazards, safe zones, snow-pack and checked beacons….a breath…I dropped in, tender turns avoiding a convex pocket into the chute entrance and I bee-lined it to protection.  Stability was evident and I continued into the chute – wide enough to open it up a bit and narrow enough to keep it interesting.  It was loaded with wind-blown powder, sluffing, but stable.  I linked a turn under mid-face protection and called Lachy in on the radio……A handful of linked turns and Lach flew past at warp speed hooting with stoke – although he’d had a break from snowboarding, the years in Chamonix and free-ride skills instinctually came to the surface.

An elevating freeze level narrative spoke through the ice fall as we exited Crags Creek, dense cloud cloaked over and we were in a vertigo matrix of whiteout.  We navigated that matrix back to the dome and home, keeping glimpses of the corniced ridge at a safe distance, contemplating how scary it would be to do this in a glaciated landscape or a knife edge ridge.

The stoke was high…a rare treat it was to slay such perfect stable powder on a complex Aussie mountain face…practicing team work skills, spotting and watching a good mate slay it too.  It doesn’t get much better out there, we were happy that our preparations were up to the conditions on this day and realised how lucky we were.  Lach confided his thoughts of free-riding in relation to Jack and family on the return trip – it’s important to keep life priorities in check out there…