Getting ready for the next Big One

As Victoria shivers through a good, old fashioned winter, it might be a strange time to be thinking about fire. But next fire season will be with us soon enough, and there are some lessons for us from the horror summer currently being experienced in the northern hemisphere.

A 1.5 million hectare bushfire is raging in Siberia, and Alaska is burning. So are large parts of Turkey. The ‘heat dome’ that brought record breaking temperatures to the Pacific North West of North America has been followed by a fire season comparable with what we experienced over the terrible summer of 2019/20. California is experiencing a fire season that started in their winter. In January, Issac Sanchez, of Cal Fire Sacramento said “we’re not seeing ‘fire season’ any more. It’s just one big fire year, where we can be prepared for and expect a large destructive fire at any point.”

The statistics for the current fires are mind boggling: In the USA, there have been more than 90 large fires which have already burned more than 600,000 hectares across 13 states. More than 19,300 wildland firefighters and support personnel are assigned to the incidents. As well as civil aircraft, military C-130 aircraft are being deployed to fight fire. In Canada, more than 3,600 people are involved in firefighting efforts, including 100 firefighters from Mexico. The federal government is also sending up to 350 military personnel to join the firefighting efforts and in British Columbia, there are 178 helicopters and planes supporting ground crews. There have been 1,162 wildfires to date and over 16,000 properties remain on evacuation alert. Fire thunderstorms — which occur in pyrocumulonimbus or pyroCb clouds — not only create their own weather system but may also be powerful enough to actually change the climate. They are growing in frequency, and so far this year, Canada has recorded at least 46 pyroCb events, and the USA has experienced 15.

Climate change is the catalyst for the worsening wildfire seasons around the world. Fire seasons are getting longer and more intense and we haven’t seen the worst of it yet. As was noted by Associate Professor Euan Ritchie, a researcher in wildlife ecology and conservation at Deakin University after the 2019/20 fires, “we are not in a ‘new normal’, as things are still changing and getting worse, caused by our individual and collective inabilities to combat the major causes of climate change.”

We will need additional resources to fight fires

We fight fires by sharing resources: firefighters, support and specialist staff and aircraft. During the 2019/20 season, Australia drew on 1,000 overseas firefighters, more than in previous seasons. However, with fire seasons also becoming longer in the northern hemisphere, we cannot assume we can continue to rely on such large numbers in future. We share resources with other states and territories and longer seasons across the country will add pressure to existing volunteer and career firefighters. It has to be expected that covid will impact on movement of firefighters from overseas for at least a couple of years. Australia has just sent a crew of 50 specialist firefighters to assist efforts in Canada, and covid was one of the reasons given for sending specialists rather than firefighters.

During the summer of 2020/21 Victoria had around 1,100 paid firefighters employed by the state and thousands of volunteers. The governemnt adds at least 300 additional fighters every summer to its permanent force. Up to 2,000 current staff in agencies like DELWP, Parks Victoria, Melbourne Water and VicForests can also be deployed, who have a ‘fire role’ in addition to their normal duties. But as was shown by the 2019/20 fires, we still need additional capacity. Despite heroic efforts by volunteer and career firefighters, many locals and other emergency responders, and the teams who run the aerial firefighting efforts, fire after fire got away and turned into blazes that devastated landscapes and towns, farms and wildlife. 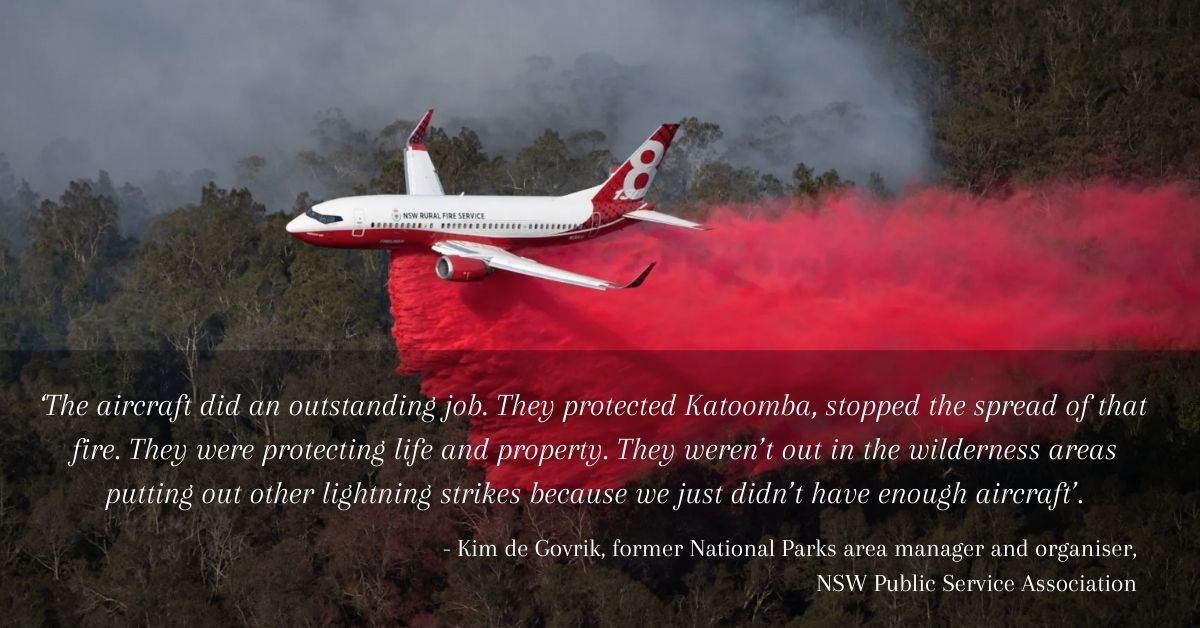 We also need access to planes from the northern hemisphere. Large Air Tankers (LATs) are essential in our firefighting efforts, yet we only own one of these. The rest are leased on the international market. The Victorian government recently announced that it had secured a deal to share a Large Air Tanker to support aerial firefighting capacity in both Victoria and Queensland during our respective bushfire seasons.

The Bombardier Dash-8 Q400AT aircraft will operate in Queensland from September to December to cover their bushfire season and will operate in Victoria for the height of summer from December to February. This is a good move by the Andrews government, which understands the need to invest in fire fighting ground and air resources.

Australia’s National Aerial Firefighting Centre contracts a fleet of around 150 firefighting aircraft across all states and territories, which goes up to 500 when including “on call” vehicles. At the beginning of the 2019-20 season, five LATs and nine large helicopters were contracted from North America, but as fires worsened in November, two additional planes were leased. 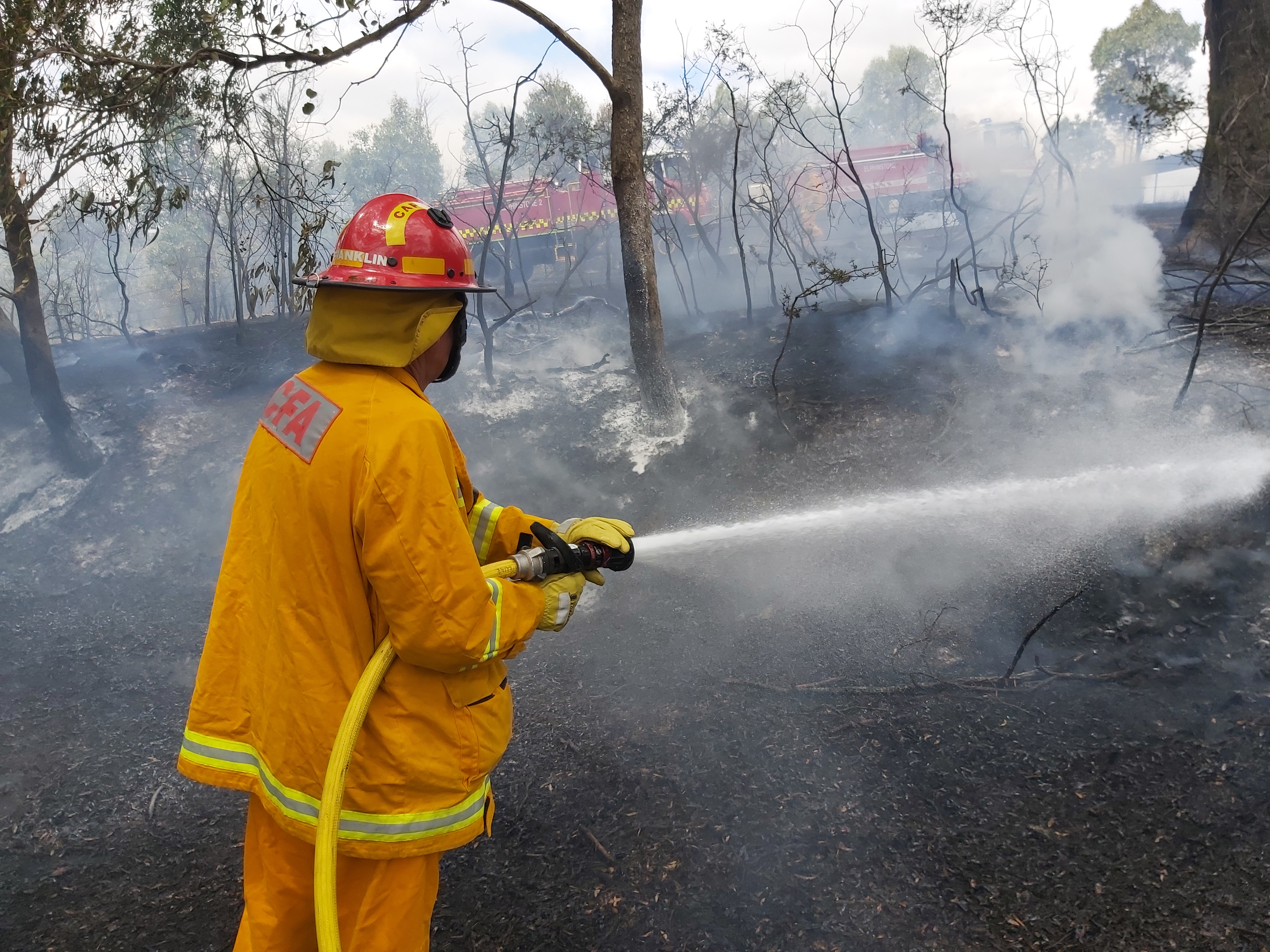 The dilemma is that as our fire seasons get longer (potentially going from September to late March), the same thing is happening elsewhere in the world. There’s more competition for the tankers than ever before as climate change and land use patterns expose new areas to fire risk. During the 2020-21 fire season, a record number of 51 aircraft helped protect Victoria from fire. Most of these were leased.

A smart option is to purchase additional aircraft so we are not locked into a market where the price of contract rentals keeps escalating. This is the responsibility of the federal government.

But it makes sense.

The Commission also suggested that the Commonwealth conduct a trial on the feasibility of retrofitting RAAF C130 aircraft with airborne fire fighting systems to provide the Australian Defence Force with the capacity to augment aerial fire fighting during major disasters.

As was noted in the first report into the Inspector-General for Emergency Management (IGEM) investigation into the 2019/20 fires, ’the past is no longer a reliable guide to the influence of climate and weather upon bushfires into the future’. We are walking into a new, hotter and drier world.

It’s too early to know what type of fire season we might face next summer. Generally we know by mid spring what sort of summer we will be facing. What we do know is that we will face more seasons like 2019/20, and that we do not currently have the resources to protect people, landscapes and human assets in those seasons. A sensible starting point in getting prepared would be for the federal government to get on with establishing a publicly owned fleet of large air tankers.

You can add your voice to the call for the federal government to create a publicly owned air fleet here.

You can find out more about the dilemma of fighting fire in a hotter world here.

General resources on climate and firefighting can be found here.